Many of the female hair loss treatments and medications are also used by men; despite the fact that female hair loss can be originated in some cases for pregnancy, hormone imbalance or menopause, other causes of female hair loss are medical conditions, medications, genetic factors and physical or emotional stress, which can also originate alopecia and baldness in men, too.

What are the best hair loss treatments for females?

Female hair loss is far more common than usually is believed. Many people think that this condition is only “a matter for men”, but according to some estimations more than 50% of women will suffer an important hair loss along their life. That´s the reason why more and more women think of getting a female hair transplant in Turkey.

Normally, doctors refuse using systemic medications to treat hair loss (pills or other forms of systemic treatment that affect the whole body) -unless they know that hair loss is caused by androgen excess or androgen hypersensitivity (increased response) to normal amounts of androgen in the body- as these systemic treatments may reduce the androgen levels in the body. This is why physicians usually choose topical treatments to be applied in head scalp.

The best results from the medications happen when they are taken as soon as the androgenetic alopecia starts, because this pattern of prolonged hair loss may destroy many hair follicles over time. Using anti-androgens after prolonged hair loss will help preventing any other damage, and will encourage hair re-growth from follicles that have been dormant but are still viable.

However if the treatment is stopped, this will lead to a return of the hair loss if the androgens are not checked in some other way. Maintaining the levels of vitamins and minerals will also help you when using antiandrogen medications, so taking some supplements can be a good idea when combating hair loss in females with this treatment.

At present, there is only one single FDA-approved treatment for female hair loss pattern. Some of these medications are not approved by the FDA to be used for this case, but they were approved for other indications, however, they are used in cases of hair loss.

The efficiency of these agents and methods could differ from one person to another, but many women have found that using these treatments have made a great positive difference in their hair and self-esteem.

In the following lines, you can find a list of medications that are currently being used for women's hair loss treatment.

Minoxidil was first used in tablets as a medication to treat high blood pressure, and it was noticed that patients that are treated with it experienced excessive hair growth. In-depth researches revealed that applying a minoxidil solution directly onto the scalp may stimulate hair growth.

The absorbed amount of minoxidil from the skin into blood stream is often too little to cause any internal side effects. Women with disseminated androgenic alopecia can use minoxidil, and it seems to be more effective for women than men.

The minoxidil manufacturing company recommend using only 2% concentration of minoxidil for women, and not using the 5% concentration, which in fact didn´t get the FDA approval to be used by women. However, some dermatologists may prescribe the 5% for women who are suffering androgeneic alopecia if used under their supervision.

Spironolactone or aldactone is a drug from the class potassium-sparing diuretics. It is used to reduce fluids amount in your body without reducing potassium. It is also used to treat hypertension, swelling, potassium deficiency and a hormonal disorder called hyper-aldosteronism.

Cimetidine is classified among histamine blockers, and it's used mainly to treat peptic ulcers. The blocking action of histamine prevents the stomach from producing excess acid, allowing the body to heal the ulcer.

Cimetidine has also a strong antiandrogen effect, and it has shown its ability to inhibit dihydrotestosterone binding with receptors in the follicles. It also has been studied in women with androgenic alopecia, revealing promising results in androgenic hair loss in females. But, due to the high dosages needed for hair growth, men should not take cimetidine for hair loss treatment because of potential feminine effects, including the reversed sexual side effects.

Cyproterone acetate is used to reduce strong sexual drive in men, and to treat hypersexuality. It is also a FDA-approved treatment for hair loss in females. Cyproterone acetate expresses its effects by blocking the binding of DHT dihydrotestosterone to its receptors.

The cyproterone acetate is not available in USA, and doctors consider it one of the last options for treating female hair loss pattern, because of its possible toxicity and long-term side effects.

Also known as hormone replacement therapy (HRT), this treatment is widely used at menopause. Estrogen and progesterone pills and creams are probably the most common systemic treatment form for androgenic alopecia for women in menopause, or for those whose estrogen and/or progesterone levels are low.

The continuous use of oral contraceptives (birth control pills) decrease the production of ovarian androgens, and they can be used to treat women androgenic alopecia. However, you should keep in mind that the same cautions should be followed whether a woman is taking contraceptives for birth control only, or just for a hair loss treatment.

For example, women who smoke, are over 35 years, and are taking contraceptives are considered more vulnerable to blood clotting and other serious issues. You should carefully discuss your medical history and lifestyle with your doctor.

Contraceptives come in various hormonal combinations, and the doctor can determine the one appropriate for your specific needs, changing the contraceptives if needed to allow you to be adapted to this combination both physically and emotionally.

Ketoconazole is available as prescribed topical treatment; it is currently used as antifungal to treat fungal infections. It also has anti-androgenic effects and can reduce the production of testosterone and other androgens by the adrenal gland, both by the male and female reproductive organs. Therefore, it can be used to help treating hair loss.

One of the best shampoos for hair loss in females is Nizoral shampoo, which contains 2 % ketoconazole and is prescribed not only for scalp treatment, but also in combination with other treatments for androgenic alopecia. There is a 1% concentration product available now over-the-counter; however it may not be as effective as the 2% concentration formulation.

Finasteride is used for female hair loss because it inhibits 5-alpha reductase, inhibiting dihydrotestosterone that causes harm to prostate, and kills hair follicles. It was first sold under the brand name Proscar as 5 mg. tablets. Then in 1998, the first 1 mg. product was introduced to the market under the brand name Propecia, as the first FDA approved medication in the form of tablets for men's hair loss.

It is very effective for most men in preventing hair loss as well as helping it grow back. It can be effective for some women. However, using Finasteride for female hair loss has several side effects.

Women should not take it in case of pregnancy, and they should not get pregnant when they're taking the medication because it increases the risk of congenital defects in male fetus. Less than 2 % of men have temporary sexual side effects, including erectile and libido difficulties while taking finasteride; however, in women these side effects do not occur.

Sold under the trade name diane 35 and diane 50, this contraceptive tablet is prescribed in Europe for female hair loss causes, like androgenic alopecia in women. This medication works by blocking some effects of the male hormones that women commonly have.

Although it is possible for the drug to stop further hair loss and trigger re-growth of the hair within about a year, it needs to be on an ongoing basis to maintain hair re-growth and to eliminate and stop hair loss.

Potential side effects include gynecomastia, headache, and decreased sexual drive. It has one positive side effect as it helps preventing osteoporosis. The drug is composed of cyproterone and estradiol, an estrogen. The medication is as effective as spironolactone, if it is not even more effective. Drugs and treatments are currently available in the United States.

In summary, there are many female hair loss treatments available, but many of them have also important potential side effects that may harm your health or your child’s if you are pregnant. So, it´s very important to get enough information before using these medications, and receive a professional assessment from a doctor specialised. In this regard, we remind you that at Clinicana we offer you a free consultation service with no obligation.

PreviousDiabetes and hair loss: how are they connected? NextHow to make your hair look healthy and shiny

Does air pollution cause hair loss? How can we protect our hair? 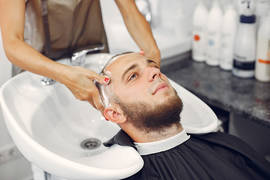 Can a hair loss shampoo really save my hair?
Subscribe our newsletter to stay updated.
You might also read