Male pattern baldness in women: what is the treatment?

Male pattern baldness in women is much more common than usually believed. It is quite normal to have the idea that baldness is only for men, and that women do not suffer from inherited alopecia. However, this is not true: it is estimated that around 50% of women will suffer from a hair loss problem throughout their lives; and although lost hair can often be recovered, in the case of women with pattern baldness the situation is different, and requires a more detailed analysis.

Many, many people come to our clinic attracted by the cost of our hair transplant and by the quality of our services; and although it is true that a majority are men, more and more women are losing their fear of recognising their alopecia problems, and putting themselves in our hands. If you also suffer from this condition, or know someone who suffers from it, in this article we explain what male pattern hair loss in women is, what its causes are, and what solutions do exist.

Can a woman have male pattern baldness?

So, can women have male pattern baldness? Surely, pattern baldness is not something only affecting men, and although is much more common among males, it can affect both male and females. However, inherited or androgenetic alopecia in women is not always easy to detect.

Actually, the problem is that many women observe how they lose hair - or how it becomes thinner and less dense - when they reach a certain age... But they see it as something normal associated with the aging process, and thus they do not take any measure to stop that process. However, it is important to make clear that getting older does not necessarily mean that we have to lose hair; furthermore, male pattern baldness among women is common even among young women.

Usually, it is hormonal changes - including changes in the levels of androgens - that are unleashed in women during some stages, such as puberty, pregnancy or menopause, which cause hair loss; besides, there are all kinds of diseases and pathologies that can make hair to fall out, such as stress, depression, anxiety, lack of trace elements and vitamins, or telogen effluvium. And, as in men, genetics also have an influence on alopecia in women.

However, as in men, inherited alopecia in women is mainly caused by the action of androgens, which are hormones present in both men and - in much lesser amounts - in women: when there is a genetic predisposition, these hormones attack follicles causing them to weaken and lose its ability to generate new hair, until they atrophy and die.

Therefore, when this type of alopecia occurs in women, it is usually because they have a high level of androgens due to some hormonal disorder: normally, this is caused by the so-called polycystic ovary syndrome (PCOS). However, it may also happen that androgen levels in a woman are normal, but, due to genetic factors, her hair follicles are more sensitive to these hormones. Factors such as stress, trauma, or poor diet, can be triggering factors or accelerate the process, too.

The important thing, therefore, is to know how to distinguish the symptoms of pattern baldness from other pathologies. For example, while in men it manifests itself with a progressive loss of hair in the frontal and upper areas of scalp, the symptoms of androgenetic alopecia in women are different: in this case, women hair loss pattern is characterised by a loss of hair density mainly in the upper area of head, with no receding hairlines, as occurs in men.

Furthermore, unlike what happens during telogen effluvium, in androgenetic alopecia hair loss is slow, but progressive, visible only over years; besides, lost hair does not grow again. In summary, the main characteristics that can lead us to determine that we have the symptoms of female pattern baldness, are the following:

Hair loss is not evident through the appearance of hairs on pillow or shower, but it is appreciated - for example - when comparing hair with photos from years ago, when we observe that there is a loss of density and volume.

It is probably that the same genes that trigger pattern baldness, have been inherited from your family and have previously manifested in a relative, whether is male or female. If there is a family history of inherited baldness, we are likely to inherit those genes.

As we mentioned before, women who suffer from polycystic ovaries, or some other hormonal dysfunctions caused by thyroid problems, pregnancy, postpartum, irregular periods, menopause, etc., may see their androgen levels increased, and so the risk of that triggering an androgenetic alopecia.

For a correct diagnosis of male pattern baldness, it is necessary to go to a specialist, who will perform a proper examination and analysis through a trichogram. Note that inherited alopecia does not end up causing a complete baldness in all women; however, an early diagnosis is vital to stop or delay hair loss as much as possible.

Can female androgenetic alopecia be reversed?

Androgenetic baldness is theoretically irreversible; on the contrary, as we have just mentioned, the primary objective of any treatment for male pattern hair loss in women will be to slow down the progression of alopecia, preventing baldness from progressing, and strengthening the follicles that are still capable of generating hair, thus increasing the density and volume of our hair.

Treatment for male pattern baldness usually involves the use of drugs such as minoxidil (for topical use), or techniques such as hair mesotherapy, both providing good results. Other drugs used with successful results are Dutasteride or Finasteride, both being inhibitors of the enzyme 5-alpha reductase, which is the factor that triggers the mechanism by which androgens end up damaging follicles in people with genetic predisposition.

Dutasteride has shown greater efficacy than Finasteride; however, it´s important to underline that women must stop this treatment and wait at least 6 months (1 month in the case of Finasteride) before becoming pregnant, in order to avoid consequences for the foetus.

Anyway, these solutions cannot make hair grow back in those follicles already atrophied, or recover hair when male pattern baldness in women is very advanced: in these cases, the only viable and lasting solution is a hair transplant in a trustworthy clinic. Clinicana is the best hair transplant clinic, and we are specialised in all hair treatments: ask us for a free consultation, and request a free, no obligation estimate.

PreviousWhat are the best vitamins for hair growth? NextHow to disguise thinning hair in females 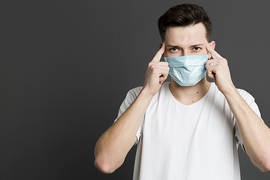 Is hair loss a side effect of coronavirus? 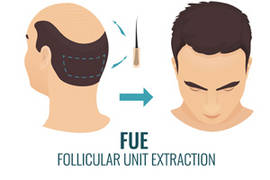 FUE treatment: what are its side effects after a hair transplant?
Subscribe our newsletter to stay updated.
You might also read