Minoxidil and hair loss: what are its side effects?

Minoxidil is one of the most common treatments applied to patients suffering from some type of alopecia or hair loss; sometimes, even people looking for the cost of a hair transplant have already tried themselves minoxidil for hair regrowth.

However, actually most people do not know much about minoxidil, its benefits for hair loss, or even its side effects. How does minoxidil work? Is it helpful to prevent alopecia? What results can I expect? You probably have also these same questions on mind: don´t worry, in the following lines you’ll find all you need to know about minoxidil.

Minoxidil is a vasodilator treatment that is commonly used to stop hair loss, and that is administered topically to scalp to stimulate hair growth. It is usually indicated for cases of moderate alopecia. It has a very precise function: stimulate blood flow so that more nutrients reach hair follicles, and faster. You can buy minoxidil under many brand names worldwide.

Currently, there are only two main medications to fight hair loss on the market: Minoxidil and Finasteride. Minoxidil is mainly topical (although you can also buy minoxidil tablets), while Finasteride (which also can be found under trade names such as Proscar, Propecia or Finide) is an oral medication. Beyond that, the third option to fight alopecia -and the only lasting one- are hair implants.

How does minoxidil help hair growth?

Minoxidil was initially developed in the late 1950s by the American Upjohn company to treat ulcers: it did not work in laboratory tests; however, it proved to be a powerful vasodilator. So, it was released for first time in the 1970s as a new drug for hypertension. However, then an interesting side effect was discovered: people who used minoxidil was observed to have darkening of existing hair, as well as an unexpected hair growth.

Realising this side effect, Upjohn started to produce in 1988 a topical solution consisting of 2% minoxidil under the brand name of Rogaine/Regain, and presented it to the world as a miraculous medicine. Then, the medicine was started to be produced as a treatment against hair loss, consisting of minoxidil 5 percent (also known as minoxidil 5) for men; from 1991 on, it became also available for women as minoxidil 2%.

Studies conducted in animals have shown that minoxidil shortens telogen phase of hair and causes an early anagen phase. It is believed to have the same effect on people, too. In addition, it is known that minoxidil can relieve the vascular muscles by opening muscle membranes, causing the effect of stimulating metabolism and decreasing blood pressure.

Similarly, there are some assumptions arguing that minoxidil opens potassium channels in hair follicles, and thus provides hair growth. In addition, minoxidil is thought to play a role in proliferation of hair cells, in restriction of collagen synthesis, and in synthesis of prostaglandins, which are key to regulate blood pressure.

As we have just explained, minoxidil can prevent hair loss and stimulate hair growth by increasing blood flow in scalp. It is believed to have a therapeutic effect by activating weak hair follicles, and extending the growth (anagen) phase of the hair cycle. In fact, minoxidil is the first medication approved by FDA to prevent hair loss.

Minoxidil helps hair growth by turning the diameter and depth of existing small follicles to normal, and providing hypertrophy, more than stimulating new hair follicles. It’s actually a vasodilator medication, causing enlargement of veins and decreasing blood pressure. In fact, the benefits of minoxidil on hair loss prevention were so clear before it was approved by FDA, that it´s well known that in the 1980s, physicians were prescribing minoxidil off-label to their balding patients.

Minoxidil studies have focused on inherited baldness (pattern hair loss), the most common type of hair loss. In male-pattern hair loss, the period between anagen and telogen phases of hair becomes shorter, and therefore hair follicles get smaller.

Pattern hair loss is more common in men, but it can be seen also in women; in fact, that´s the reason why female hair transplants in Turkey are becoming more and more popular. In tests made with minoxidil for men and women suffering from this type of hair loss, both experienced hair growth, an increase in the number of hairs, and more hair density. Since this situation occurs within 12-16 weeks from the date of the first use of minoxidil, we can say that the results of this medication become evident very fast.

This rapid effect can be explained by the reverse of the growing process of shortened hair follicles. Moreover, since existing hair gets out from telogen phase and enters in anagen phase again, hair becomes stronger and thicker, and falling out of hair slows down. After a continuous use of minoxidil, people can see soon the effects in hair: firstly, on the top of the head, and then in the front and sides.

The maximum effect while using minoxidil is seen between 6 months and 2 years; after this time, the effect slows down. The compound is administered in concentrations of 2% (minoxidil 2) in the case of women, or as minoxidil 5 for men (minoxidil 5%), normally topically. In cases of severe hair loss, minoxidil 10 can be prescribed, having been proved more effective than minoxidil 5: however, the side effects of using such high concentrations of minoxidil are still being studied.

Minoxidil and side effects

Besides these side effects, minoxidil should not be used during pregnancy and lactation, since the medication could affect the baby. However, contrary to some beliefs, the use of minoxidil does not cause sexual impotence. No scientific study has proven that minoxidil causes erectile dysfunction. On the contrary, Fenasteride can cause impotence, and decreases libido, too.

Minoxidil is an important advance in the treatment of alopecia; however, it is not a miracle medication. The best minoxidil results are obtained in early or light stages of hair loss, being especially effective in people under 40 with a recent hair loss. However, it´s important to underline that minoxidil does not work on every patient: it has an effectiveness of between 15% and 60%, depending on several factors.

Besides, another main disadvantage of using minoxidil is that this is a lifetime treatment. That is, you must use the medication every day -usually applying it 2 times a day- during the rest of your life: interrupting the treatment means normally a stop in hair growth, at first; and then, the complete loss of new hair within 3-4 months.

That´s the main reason why, since the appearance of the modern techniques such as the FUE method, hair transplants have become more and more popular among patients with alopecia problems. Nowadays, a FUE transplant is the only long-lasting and definitive solution for people suffering from hair loss, to recover their hair: it’s a painless technique, which only requires local anaesthesia, leaves no scars... and since transplanted hair comes from the patient himself, there is no risk of rejection and, therefore, no need of medication.

In sum, if you are suffering from mild hair loss, you can consider the use of minoxidil as a temporary solution. But if you have an advanced form of alopecia, or if you just want a definitive solution to recover your natural hair without resorting to medication, consider a hair transplant: Clinicana is the best hair transplant clinic, and we are specialised in all hair treatments. Request a free consultation, and ask for a free, no obligation estimate. You can save your hair!

PreviousHair cloning: when will it be available? NextHow to disguise thinning hair in females 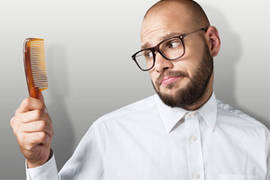 20 tips about how to stop hair loss in men 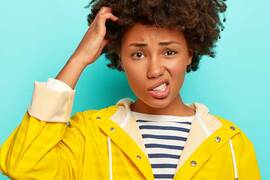 Head lice and pediculosis capitis: all you need to know
Subscribe our newsletter to stay updated.
You might also read