Although it is a benign disorder with no major health consequences, and affects just 1 in 900 people, many people who search on Internet about the hair transplant cost in Turkey do it because they suffer from this type of alopecia and seek a solution, since it causes aesthetic alterations that, when reaching adulthood, maybe a source of concern. So the questions are: what are the causes of this alopecia? Does it have a treatment? Let´s answer all of them.

What is triangular alopecia?

It usually appears as an unilateral lesion in frontal area, in parietal area (superior) or in temporal area (lateral) of scalp (if this is the case, we call it triangular temporal alopecia); however, in 20% of cases bilateral lesions are documented. The disease was described for first time in 1905 by the French dermatologist Sabouraud, and affects only 0.11% of population, although it is probably infra-diagnosed; it´s not progressive, and affects only a limited area.

Despite being a congenital hair loss, usually it doesn't become evident in children until they are 2 or even 6 years old, hence some specialists prefer not to speak of "congenital" triangular alopecia. Besides, some studies have documented rare cases in which it begins in adulthood; so, due to this variability, the term "temporal triangular alopecia" or simply "triangular alopecia" is more accepted.

Due to its benign nature, not much is known about this pathology. It seems to be caused by an atrophy of hair follicles, whose number is normal in the affected area but are underdeveloped (hypoplasia), becoming almost imperceptible. It is believed to be triggered by genetic factors, although cases of family inheritance are rare. Most of those affected have a good health, and only occasionally it appears associated with neurological or skin disorders; but if there is a direct relationship, it's still unknown.

Does temporal triangular alopecia have a treatment?

It is important to diagnose this type of pathology on time and by a specialist, in order to differentiate it from others similar hair pathologies such as alopecia areata, trichotillomania, scarring alopecia, etc. Due to the fact that its causes are not well known, triangular alopecia does not have a specific treatment, and the use of both minoxidil and topical or intralesional corticosteroids has not proven to be effective.

Therefore, the main treatment used for triangular alopecia is aesthetic and involves performing a hair transplant in the affected area; of course not in childhood, but once patient reaches adulthood and demands an aesthetic solution to the problem. The results obtained through a hair transplantation are very satisfactory, completely eliminating the problem with a simple intervention that only requires local anaesthesia.

If you suffer from triangular alopecia, at Clinicana we are specialists in all treatments and solutions for your hair. We have not just a highly skilled and qualified medical team and the most modern facilities; we also have all the international certifications that guarantee you a 100% safe hair transplant. Read the reviews on hair transplant in Turkey written by our patients, and ask for your free consultation now! 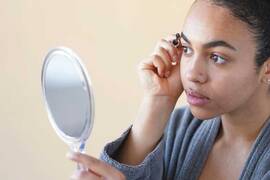 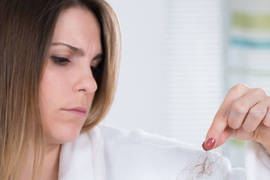 Frontal fibrosing alopecia: what is it and how to cure it
Subscribe our newsletter to stay updated.
You might also read