Pimples on head: causes and treatment

Pimples on the head can appear for many reasons, although they are usually caused by the same hormonal imbalances that trigger the appearance of acne; it is an aesthetic problem more common than usually believed; and since it occurs on scalp, it can even cause hair loss.

We have received inquiries from people who are interested in the cost of a hair transplant, asking us questions such as “How to prevent pimples on head?” because they have friends of family with this condition. So, what if you have pimples on your head? In this article we are going to answer the most common questions about this problem: what are its consequences for scalp, and what are the solutions available. Burt first of all, lets take a look at the causes of pimples on hear or scalp.

Why do I get pimples on my head?

Let’s start from the beginning: Why do I get pimples on my head? Although one of the most common causes for the appearance of pimples on scalp is acne - something associated with periods such as puberty, pregnancy, etc. - the truth is that pimples can appear in anyone and at any age, since in addition to hormonal imbalances, there are other triggering causes.

The appearance of painful and itchy pimples can significantly alter daily life. Its appearance is caused by a response of our immune system, which reacts to an infection by triggering an immune response, causing the inflammation and formation of pus that usually characterises acne pimples. It is advisable to always go to a specialist, who will determine the causes and the most appropriate treatment.

Many people who suffer this problem tend to think that it’s a minor problem and - since pimples can’t be seen with the naked eye – that they should not worry about it. However, the appearance of pimples can cause - if not treated properly - hair loss; in addition, pimples can be a symptom of a more serious disease. In summary, we can say that pimples on head can appear due to the following causes:

Pimples on head, like pimples on face, can manifest themselves in many different ways; depending on whether pimples are stuffed with blood, pus, sebum, water, etc., we will be facing symptoms with different causes and, therefore, we will have to apply different treatments. In general, we can find the following types of pimples:

How to reduce pimples on head

We have seen what types of pimples are there, and what causes them; but, what is the treatment for pimples in head? Although in many cases you may resort to a simple home treatment for head pimples, in other cases a proper head pimples treatment will require to consult a doctor and a prescription drug. Let´s see what to do if you have pimples on your head:

Although the appearance of pimples on head is not a serious health problem, we recommend to consult a specialist to examine our case and avoid complications, such as hair loss. If hair implants become necessary, they can only be performed once pimples have been properly treated. Clinicana is the best hair transplant clinic in Turkey, and we are specialised in all hair treatments: request your free consultation, and ask for a free, no obligation estimate for your treatment. 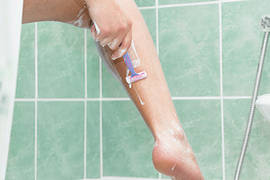 Does shaving make hair grow ticker, or even faster?
Subscribe our newsletter to stay updated.
You might also read