17 alpha estradiol: results against hair loss and side effects

17 alpha estradiol is increasingly being used against alopecia thanks to its properties to combat the causes of hair loss. It is known that the main reason that causes alopecia is male pattern baldness, which depends on hereditary factors; as a matter of fact, most of the people who ask about the cost of a hair transplant in our clinic, suffer from this type of alopecia.

However, hormonal factors also play an important role in alopecia, and it is here where 17 alpha estradiol - a female hormone that claims to be a barrier against the action of male hormones such as dihydrotestosterone (DHT) – intervenes. In this article we will explain what is estradiol and everything related to this treatment: what are its benefits... and its limitations.

Is 17 beta estradiol the same as estradiol?

Estradiol appears in woman's blood at higher levels than estrone during the years when she is fertile. The role of estradiol – which is the most powerful natural estrogen - is not limited to reproduction; it is also key for the proper function of other organs, including bones.

What does estradiol do in females?

A study carried out at the Marburg University in Germany on the influence of estrogens on hair loss, concluded that pattern hair loss in women reduces its effects by the action of estrogens; however, when these decrease after menopause, this protection is reduced. In fact, it has been proven that women suffering from hereditary alopecia have their hair loss slowed during pregnancy because of the increasing estrogen levels.

What is 17 alpha estradiol?

17 alpha estradiol is a variant of 17 beta estradiol. Several studies have confirmed that 17 alpha estradiol causes an increase in the transformation rate of testosterone into 17 beta estradiol; this is due to the fact that this variant inhibits the action of the 5-alpha reductase enzyme, which is responsible for transforming testosterone into DHT, the molecule that causes pattern hair loss in those people who are genetically more sensitive to it.

It is known that it is the accumulation of DHT what actually causes - in people with a genetic predisposition - follicles to atrophy until they completely lose their function, thus accelerating hair loss; especially in men, although it also affects women during stages such as menopause, because hormonal changes cause an increase in the production of hormones such as DHT.

Why does it help against alopecia?

Due to its properties, the 17 alpha estradiol hormone is used as a treatment against alopecia in both men and women; however, 17 beta estradiol can only be used in women.

As we already mentioned before, 17 alpha estradiol has the effect of reducing production of DHT, thus avoiding its effect on follicles in people suffering from pattern hair loss, by slowing down the loss of hair and increasing its production. It has also recently been shown to be effective in treating other types of alopecia, such as telogen effluvium.

Does estradiol have side effects?

The side effects of estradiol are rare and minimal, which together with its benefits makes it an important weapon against many types of hair loss.

It is administered in solutions for topical use, in very low concentrations (0.1 to 0.2%) that are normally applied at night (similar to minoxidil), always ensuring that the product does not come into contact with the mouth or the eyes.

Is it a definitive solution against hair loss?

One of the main drawbacks of estradiol is that its manufacturing process is quite complex, and therefore expensive, although since it is used in very low concentrations, if you want to buy estradiol the final sale price is not that high.

In any case, it must be made clear that the results obtained with this treatment help to stop hair loss in patients with alopecia, but in no case can generate new hair from where it has stopped growing. That is, you cannot recover your follicles in those areas that have stopped producing hair and, therefore, the only solution for these cases remains - for now - a hair transplant.

If you are considering using 17 alpha estradiol for your alopecia problems, you should first ask for professional advice about whether this is the most appropriate treatment for you. Clinicana is the best hair transplant clinic in Turkey, and we are specialists in all types of hair treatments: request your free consultation, and ask for a free, no obligation estimate. We can help you!

PreviousLupus and alopecia: is there a treatment? NextHow to make your hair look healthy and shiny 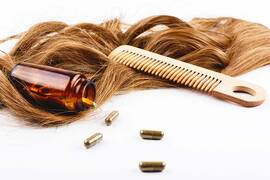 What are the best vitamins for hair growth?

Head lice and pediculosis capitis: all you need to know
Subscribe our newsletter to stay updated.
You might also read